Finally, news from the MTC!

Well, this is actually "ridiculouslygoodlooking" updating her blog for little miss Sarah Louise Ray as she is currently inside of MTC walls in Provo, Utah. I will be posting her weekly emails on here and other little tidbits she writes to me in my letters - that she wouldn't mind me sharing of course. Haha! Below is her first MTC email and address so all her friends and family can write her! Enjoy!

"So I finally have the email set up and I am on the grid again so to speak. I will try to give you a good update in the time that I have left. So, I promised more information on the solo sister thing. What being a solo sister means is that I am the only girl in my district. There were no other Portuguese girls who came in last week. We also won't have any more for another two weeks. My companion is one of the sister in the trio that is 3 weeks ahead of me. Her name is Sister Earley and she is going to Lisbon. I am actually the only girl in the entire MTC that is going to Porto. We also have people in our Zone going to Mozambique and to Cape Verde. Basically being a solo sister means that I can go wherever I want as long as I am with two elders, hopefully in my district. OF course, on P-day, during gym, and on Sundays I am always with Irma Earley. I have to admit it is a little strange. I do my teaching with a companionship of elders as well as my companionship study. I get to do all the fun stuff with Irma Earley and usually we are with the other two sisters as well. We actually had a zone wide kick ball game during gym period and we had a lot of fun. It was a Portuguese only game so we all learned a wide range of vocab that included cheater, liar, and sinner. We are really uplifting people. They are actually usually the common four square words, but they worked well for Kick ball as well.

The other two sisters and Irma Vega and Irma Hokafunu. We actually all get along really well already. At fist they were in a different room from me even in the residence. Luckily, two days ago we played fruit basket turn over which resulted in all 4 of us being in the same residence room now. Before I was in a room with two Taiwanese sisters, two Swedish sisters and me. We called ourselves the misfits, and they were great. However, I think we were all happy when the Taiwanese sisters moved in with the rest of their district and the three Portuguese sisters moved in with me. Now we can all do better at practicing our languages. I have to admit we had some really fun conversations before the move when all of us were speaking different languages to each other.

The classes are going pretty well. I am definitely more confident in my teaching abilities. The Portuguese is a different story. Everyone told me Spanish was going to help. That is true in that I know how to conjugate verbs and the difference in the tenses as well as ser and estar. In every other aspect the Spanish is making the Portuguese a bit tough! I got called out completely for speaking Spanish in my first Portuguese teaching appointment. It was interesting because when I don't know the word in Portuguese I just automatically say it in Spanish and move right along. Well, that is a bad thing, but I'm sure that eventually I will get the hang of it. I was able to help the other sisters out with how to conjugate and when to use what tense.
So funny story of the day...We had the opportunity to go to the temple this morning and it was really a great experience. We have people who send our zone names so we do those and then give them all back to Elder Schenefelt to mail back. Well, Sister Vega has been having some really bad back problems so she is on Hydrocodone right now- which made her a little loopy throughout the entire session. Besides just being funny, it caused her to put the family file card down the laundry shoot at the end of the session. As a result they had the opportunity of taking a tour of the laundry facility. The really funny thing is when Irma Earley and I went to put our clothes down the shoot you could hear them attempting to explain to the temple workers what had happened. It was echoing through the dressing room!

So I had a nice little list of things to make sure and include in my email, but I left it in my room. BLAST! Well, I will just have to tell you all the random stories next week. I did have the opportunity(?) of giving the musical number in sacrament meeting last week. I had been in the MTC less than 4 hours when I was asked to take part in the musical number- In Portuguese! It made me learn the Portuguese pronunciation pretty quick. Irma Earley and I sang with two Elders and it went pretty well considering we hardly practiced. I also get to write a talk for this Sunday in Portuguese. I guess it is a bit of trial by fire. It is the best way to learn right??
I really am having a great learning experience. You have quite the roller coaster of emotions every day, but overall you know that you are doing what the Lord wants you to and it makes it all worth it. It seems like the minute that I start to get really down there will be an almost immediate answer to prayer and I will know that I can do this. Well, I have to send this soon because I only have a couple minutes left. I LOVE YOU ALL!!!! 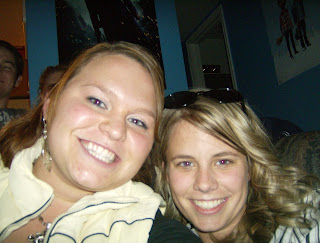 This is Sarah and "ridiculouslygoodlooking" the night before she went into the MTC! She loves and misses ya'll, but is loving serving her Heavenly Father!
Posted by Linze Kate at 6:41 PM

Our last day on BYU campus with all the older cousins!

This is the guy who we had to give the password to every day to get into the compoud where we would have our morning meetings before heading out to the community!

One of many concerts


we all came down to go to a show and randomly matched...

Quasimoto's lair... we broke in